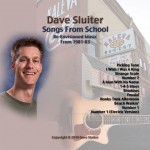 In recent months I had been feeling motivated to start playing guitar more. I bought a new Taylor 814ce. It has an amazingly full and bright sound. Then I stumbled upon an audio cassette tape I had made during the Fall of 1982 and the Spring of 1983, just prior to graduation from Michigan Tech.

Back up 30 years. When I went off to college in the Fall of 1980, I had bought an Epiphone factory second acoustic guitar for a $100. I met George Pomerville in the dorms and we became good friends. Once we moved out of the dorms George & I roomed together in apartments until we graduated. George taught me a lot about guitar playing. During our tenure at Tech, we ended up writing 20+ songs. Along the way we met Matt Rooke. The three of us spent many evenings sitting around our apartment drinking beers & writing tunes – as there’s really not much to do at Tech in the Winter months. I learned to play by ear and feel. I developed an “organic” approach to song writing, not fully understanding why what we wrote even sounded good (Currently I’m reading “Music Theory for Dummies” – maybe that will help me understand more of the “tech” stuff – LOL). On many songs, one of us would play the rhythm part & another would improvise a lead of some kind. Sometimes we’d play in a “round” where we’d each take turns playing rhythm so the other(s) could have fun making up lead parts. Somewhere in the back of my mind I must have realized that it was important to capture these songs on tape. I listened to the tape in January 2010 and that lit a fire under me. I was going to re-record my favorites. And here we are.

All of these songs may be freely distributed for personal use. Commercial use, covers or public performances are strictly prohibited. All songs are Copyright © ℗ 2010 Dave Sluiter. All rights reserved.

Some info/background/inspiration on the songs:

I Wish I Was A King – George taught me this one.

Strange Scale – (My fav) Really just like how the rhythm & lead interplay.

A Man With No Name (aka Long Time) – This was the first song I ever wrote music & lyrics for.

1-4-5 Blues – Basic Blues pattern. I used to make funny faces when I strummed the strings up at nut.

Shadows – George’s song. I always liked this one.

Honky Tonk Afternoon – Can’t remember? Maybe it was the beer.

Beach Walkin’ – Inspired by walks on the beach along Lake Michigan.

Number 1 (Electric Version) – Couldn’t resist getting out the Stratocaster.

Lyrics are included for the respective songs with lyrics. To read the lyrics, in iTunes, right click on the song, “Get Info…”, click on the Lyrics tab. Never claimed I was a singer. I debated for a long time whether to attempt to sing or not. In the end, these songs just had to have their words, apologies.