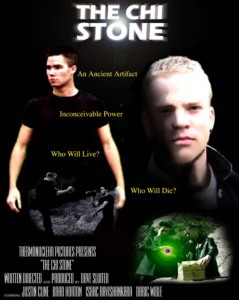 For our 2nd production we decided we needed a basic story and a script. One day at work in August of 2000, while I was listening to my executive vice president on a conference call, an idea hit me. I had my PowerBook with me. I fired it up & started madly typing a script. The story line we have today is nearly identical to that initial “draft” of a script I wrote during that conference call. What we wanted was a “weak” plot to wrap around some cool martial arts. I believe we have achieved that.

The other “thing” that had become painfully obvious to me was planning. “Just In Time” represented one end of the spectrum where absolutely no planning was performed at all. “The Chi Stone” would represent the other end of the spectrum, or at least as far as we could go as amateurs with jobs, school, families & responsibilities. What started with iMovie and a Sony DCR-TRV120 has progressed to Final Cut Pro, QuickTime Pro, Adobe After Effects, Commotion DV, Cinema 4D GO, Cleaner 5 and a Sony DSR-PD150. We have a script. The plot is weak but it’s better than nothing – How much story and character development can you do when the entire film is less than 10 minutes long? We have a shot list in lieu of story boarding (because I can’t draw for beans). We’ve been in the studio rehearsing and choreographing (is that a word?) the fight scene nearly every weekend since October 2000.

“The Chi Stone” was done in the style of the old Hong Kong Kung Fu movies – corny and over the top. Although we didn’t do the over-acted facial expressions, I intentionally made the dialog as silly as possible – and yes, I know, none of the main stars are Asian – that’s part of the corniness.

“The Chi Stone” was shot for NTSC–VHS. The web version here has been chopped down to make the files smaller to download. The DV version that was used to create the downloadable versions is 1.23 GB. The entire project takes 20 GB. The fight scene was shot with a combination of tripod shots and handheld shots. The wide angle shots were all on the tripod. The close-up shots were all hand held. My goal was to create a “you were there” feeling during the fight sequence. I used After Effects for all the special effects: The intro, the fog, the chi stone, the smoke etc. I used Final Cut Pro to assemble all the clips for all the scenes and to add transitions, music and sound effects.

I had to fix several shots. In the beginning of scene 03 (Bad News), I ran up the hill with the camera in my hand, holding it low to the ground and angling it away from the actors. When I got around to the other side of the actors location, I spun the camera around & then they started “action”. I didn’t have time to check & replay the shot. When I got it transferred to the computer I noticed that a car was driving down the road that is visible in the first shot. I also noticed that Justin and Matthew were couching near the edge of the scene along with their backpacks as I spun the camera around. I used Commotion DV to “paint-out” these artifacts. Also in scene 02 (Stolen) I had accidentally left my red jacket down below on a rock. For this I used After Effects & made that section black & white & added a little Fast Blur – wha-la – no jacket. See if you can spot it.

There are 16 FX shots in addition to the shots I had to “fix”. Most of the FX were created with Adobe After Effects. The “Chi Stone” itself was rendered with Cinema 4D as a QuickTime movie with an alpha channel (the alpha channel defines the transparent areas of an image). It is just a 3D rotating sphere with a black & white marble texture mapped onto the surface. This was then composited on top of the original footage (from primary photography) with After Effects. The glows & energy bolt were added with After Effects as well. In order to align the rendered chi stone with the live action footage, I used a small yellow ball for the guys to hold. It showed up well in the DV & made it easy to align the rendered chi stone.

For camera positions in my shot list, I used a “face of the clock” scheme to orient the camera. 12 o’clock was the position on the ground from which Kung and Kenny would enter the scene. All other positions were measured relative to this. When you see “@4:30” in the shot list, the camera is located at 10:30 pointed at 4:30.

The primary choreography was handled by Justin, although Isaac, Daric, Brad & I added suggestions along the way. Kudos to Justin. (Sometimes Isaac’s brain was in overdrive – “You know what we could add here …”. “No Isaac, that doesn’t fit into the plot of this one. Maybe in the next one”.) I would like to thank the “guys” for all their hard work and determination. They are the ones that made this possible. They came into the studio almost every Sunday for 3 hours to work on the choreography – and they did this for 6 months straight.

The Adobe After Effects Team (CoSA Lives!). After Effects is the coolest program I have ever used – it’s so visually satisfying 🙂

“Creating Motion Graphics with After Effects” by Trish & Chris Meyer

The people at 2-pop